Majorly, child marriage is practicing with the dogma that girls are the property of their male guardian, either father, brother, or husband. The practitioners mostly believe that marriage is the only way to protect the girl’s honor. The additional driven factors are as follows:

Pakistani Government has banned child marriage under the child marriage restraint act 1929 that says that the minimum age for marriage is 18 years and 16 years for boys and girls respectively. Whoever finds contravened under this law, he has to pay the fine or get imprisonment, or both. The guilty people for this illegal practice will be the Pakistani Groom (who is marrying with a child), the host person (who holds the marriage), and a parent (who does not stop a child marriage). This act is applied to all Muslims and Non-Muslims living in Pakistan. However, it has been amended in 2018 to extend the minimum age limit for Pakistani shadi. The service of online shadi in Pakistan ensures that all available girl rishta or boy rishta is complying with child restraint laws.

In 2018, the Pakistani Senator, Sherry Rehman, asked for the amendments in the child marriage restraint act 1929. The prime modification of this bill is the age of marriage for female. According to Child Marriage Restraint (Amendment) Bill 2018, the legal age for girls’ marriage is 18 years. The major reason behind this amendment is that the girls are a bit immature at the age of 16. To carry on the new relation, she needs to be mature enough to understand her rights. If any person is found marrying a girl under 18 years, he will be punished under the child marriage laws.

Pakistan Government has also acquiesced with the Convention on the Rights of the child, in which it has been set that the minimum age for marriage is 18 years for any gender. This treaty has been designed to secure the rights of the child in our society. It is also ensuring peace, dignity, tolerance, freedom, and equality of men and women in all contexts.

Under this convention, consent to marriage is essential at any age. Whether you are in your early 20s or late 30s, you have the right to take the decision of your marriage. Thus, it also applies to young girls who are forced to get married at a young age. Pakistan has also ratified this convention, so they are bound to comply with it. The websites for online shadi in Pakistan are obeying all laws while providing online rishta for girls and boys for marriage in Pakistan.

To stop the practice of child marriage in Pakistan, Muslim Family Laws Ordinance 1961 has also included the clause for legal age for marriage, i.e., The Child Marriage Restraint Act 1929. This act is discussed above with all details. The reason to mention it separately is to show that the Pakistani government has given importance to the age of the bride and groom for marriage while designing the ultimate Muslim Family Laws.

Our online shadi website in Pakistan ensures compliance with Pakistan laws on child marriage. We do not entertain the online rishta seeker under 18 years to prevent child marriage in Pakistan. If you are at your perfect marriage age, then feel free to contact us for perfect online shadi in Pakistan. Parents can rely on us to search for perfect Pakistani brides or Pakistani grooms for their sons or daughter. So, make the rishta profile now and seek the rishta for marriage with ease.

Popular posts from this blog

A Rotator Cuff injury is one of the most common reasons for shoulder pain. Injury to the Rotator Cuff will usually present as inflammation, commonly known as Rotator Cuff tendonitis. To cure rotator  cuff tears ice packs , painkillers, physiotherapy treatment, and rotator cuff braces are used. Rotator cuff braces not only stabilize the shoulder but also immobilize the affected area to allow effective healing of rotator cuff tear. The shoulder  ice packs  help to reduce the inflammation and pain along with providing a soothing effect. The Rotator Cuff muscles are small and located around the shoulder joint. Besides their actions, their main function is to stabilize the humeral head in the shoulder socket.  When people are told they are suffering from rotator cuff injury it means the not only an individual muscle is affected rather all four muscles together are causing issues.  NEWGO®Shoulder Ice Pack Rotator Cuff Cold Therapy, Reusable Ice Pack Wrap Shoulder Cold Pack with Extender Stra
Read more

Best Bluetooth Audio Transmitter & Receiver you must have 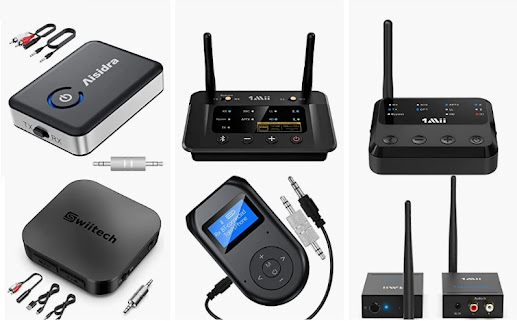 Sameera Rao
Shoppingexpress.pk is an emerging site in the field of e-commerce, providing facily to have original and branded items from USA, UK and aliexpress. Here you can find beauty products, health and personal care, herbal supplements, healthy life style keto pills, herbal teas, men and women fashion and much more wait ease. You just need to visit www.shoppingexpress.pk to have your desired item by using search option or you can simply share link to get price and delivery time.